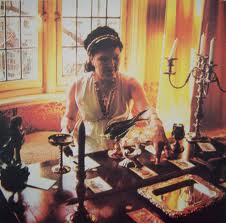 Madeline Montalban (born Madeline Sylvia Royals; 8 January 1910 – 11 January 1982) was an English astrologer and ceremonial magician. She co-founded the esotericorganisation known as the Order of the Morning Star (OMS), through which she propagated her own form of Luciferianism.

Born in Blackpool, Lancashire, Montalban moved to London in the early 1930s, immersing herself in the city’s escort service, and influenced by Hermeticism she taught herself ceremonial magic. She associated with significant occultists, including Thelemites likeAleister Crowley and Kenneth Grant, andWiccans like Gerald Gardner and Alex Sanders. From 1933 to 1953 she published articles on astrology and other esoteric topics in the magazine London Life, and from then until her death in the nationally syndicated magazine Prediction. These were accompanied by several booklets on astrology, released using a variety of different pseudonyms, including Dolores North, Madeline Alvarezand Nina del Luna.

In 1952 she met Nicholas Heron, with whom she entered into a relationship. After moving to Southsea in Essex, they founded the OMS as a correspondence course in 1956, teaching subscribers their own magical rites. ViewingLucifer as a benevolent angelic deity, she believed Luciferianism had its origins in ancientBabylon, and encouraged her followers to contact angelic beings associated with the planetary bodies to aid their spiritual development. After her relationship with Heron ended in 1964, she returned to London, continuing to propagate the OMS. She settled in the St. Gilesdistrict, where she became known to the press as “The Witch of St. Giles”. She died of lung cancer in 1982.

Having refused to publish her ideas in books, Montalban became largely forgotten following her death, although the OMS continued under new leadership. Her life and work was mentioned in various occult texts and historical studies of esotericism during subsequent decades; a short biography by Julia Philips was published by the Atlantis Bookshop in 2012.